She's so inside it. Serenity, my two year old granddaughter, is so inside the song. She loves the way she feels inside the song, swinging herself around the room. She sings the lyrics as she understands them, she smiles and twirls, looks down at her little legs poking out from under her shirt - scratch that, under her sister's shirt. The one she's borrowed that is a bit long on her and feels pretty as she looks down and spins. She spins again and the song continues to play from my phone which I have strategically placed on the windowsill. There is a bouncing of sound from that spot, a trick that gives us more than we're actually getting.
"I'm gonna live like tomorrow doesn't exist, like it doesn't exist..."
My oldest granddaughter dances and sings, too. Nevaeh, big sister, little lady, speaker of opinions. She sings and dances with me. My heart is swelling while I'm dancing with my oldest granddaughter but Serenity, my younger granddaughter, is alone in this world. I recognize that place. The song has swept her away and she's flying.
"I'm gonna fly like a bird through the night, feel my tears as they dry..."
I can hardly hold onto my heart as it wants to fly with her, alongside her, forever be with her. Serenity swoops down low and then brings herself up, fills her lungs with air and sings out: "I'm gonna swing from the chandelier..."
But, suddenly, a crash. A smacking of toes into the wall, cut by the vent. Where was this? Where did this come from? We were flying, we were everywhere and filled with such joy when BAM! 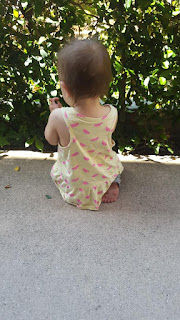 I swoop down, Nevaeh runs over to her little sister, Serenity is crying crying crying out. She's bleeding and hurt. It isn't going to require medical attention but it needs attending to. And now, drastically, the song sounds obnoxious. Cruel, even. Holding my sweet granddaughter in my arms, her sister cooing, "It's okay 'renity, shhhh, we're here. It's okay." I reach up to the windowsill and silent the vehicle of this pain.
"One, two, three, one, two, three..." pause.
I think about this as we stop dancing and start finding distractions from her pain: I think about how much joy she was immersed in, how filled up with fantastic feeling Serenity appeared to be and how, had she been more present, less letting herself be taken away into the place she had been taken away to, she may have been more careful. She may not have gotten hurt. And we would still be dancing away, silly and safe in the bedroom.
Yet it is in that place, that allowing of abandon I saw on her, where I feel my most free, my most connected to the world, my most awesome. Do I want to say, "Be a little more careful, sweet Serenity. Don't let yourself get so carried away,"? Or do I want to say, "It's okay, little love of mine, you will feel better soon. And the joy of letting yourself be so free is worth the bumps and bruises,"?
I think about this and I know both answers are right. I know I want my grandchildren to throw caution to the wind with courage, kindness, and curiosity; I also know I want them to think things through and choose carefully, with eyes open.
I want Serenity to sing her heart out while moving to the music, untethered by distractions inherent in paying attention to the world around her. But I also want her to watch her toes. Her sweet little feet matter to me more than I can express, even understand.
The song, Chandelier, sings to us from a woman "just holding on for tonight, on for tonight," and claiming she's "gonna live like tomorrow doesn't exist, like it doesn't exist."
But I want Serenity to succumb to abandon because tomorrow does exist, because flying like a bird through the night can bring a feeling of connection and awesomeness and perspective and joy that is not easily felt or celebrated in everyday activities.
So, I think about this.
About Serenity's song and the joy it brought her, a joy that was entirely felt because she let go of looking at the world around her in order to fall into the feeling, how then she was - necessarily - unprepared for the edges that hadn't disappeared.
When we decide to be brave, to follow our heart, to step into a life we are called to but have no experience with, to be swept up in emotion, it makes sense to be careful. When I dance, for example, I move furniture, I wear my knee brace, I choose a fairly safe environment. But then, I dance and disappear and close my eyes.
When I've done what I can think of to set myself up for success, I let go. Invite abandon in.
That's what I want to tell Serenity.
Set yourself free.
When you swing from the chandelier hold on, for more than only tonight, and if you fall there are so many of us who will be here to attend to your wounds.
As Nevaeh sweetly said, "It's okay 'renity. We're here. It's okay."
Hugs, smiles, and love!
Autism Answers with Tsara Shelton (Facebook)
If you want to check out the song that brought Serenity such joy, here ya go: https://youtu.be/2vjPBrBU-TM Just, please, watch your toes. :D

Posted by Tsara Shelton at 8:36 AM