Autism Answer: The Cruelty In My Kindness (aka Never Give Up) 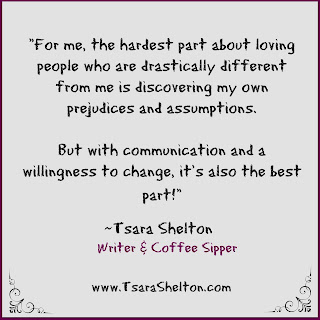 Not long enough ago I was like too many others. I assumed that people with severe cognitive challenges or neurodevelopmental disorders were to be taken care of as different and unable; the more challenged they were, the less like me I thought of them as. Sure, I knew they had thoughts and stuff, but I couldn't imagine that we ever had anything in common or that their ideas might be related to desires common with the majority of us.

But because I was "nice" I wouldn't name call or bully or make fun of people with disorders, disabilities, and challenges.  Nope, not me! I would nervously take care of them and take them to the park. Easily slipping into conversations with the people I met there, explaining why this brother of mine or this person I was volunteering my time with was behaving the way they were. I'd go ahead and make up reasons because I didn't think there were any real understandable reasons. Together my new friend and I would smile condescendingly at the person I had been nice enough to bring to the park.

Friends, I was in the position to grow and share and teach the world so many times, but I was never up for the task. Though, if you asked me at the time I would have thought myself teaching kindness.

And, you know, it's not like I didn't have anyone showing me otherwise. My mom has always, always, always exampled and taught and explained the error of my ways; the error of so many people's ways. Yet, because she was not the norm, because her belief in the abilities, feelings, and similarities that cognitively challenged adults and children have to everyone else in the world was rarely agreed to, I chose to nod at my mom with equal parts worry and condescension.

Slowly, slowly, slowly I began to see the truth behind my mom's teachings and the cruelty of my supposed kindness. That doesn't feel good, you know? Revealing yourself to have been taking the easy road at the expense of others. Because for a lot of years that's what I was doing. People would applaud my patience and I wouldn't have to make them uncomfortable the way mom did, by insisting they treat all people as equals.

Slowly, slowly, slowly is not great. But it's better than never. And I am different now, though not always comfortably so. The good news is that my new uncomfortable-ness comes from knowing that my challenged loved ones and friends are equal to me and are not "other" or even very different. If my brain was behaving similarly to theirs, I would likely make similar choices as them. So, I feel nervous because I want to be their friend but I don't have a great track record for understanding how.

In time, I hope to get over this uncomfortable-ness that I am proud of. Because I plan to keep on practicing.

Don't give up on anyone, friends! Your children, your spouse, your neighbor, yourself.

Slowly isn't always as wonderful as now, but it is wonderful.

And slowly can sometimes equally as wonderful, when it's consistent and coupled with the intention of gathering so much love and learning along the way. 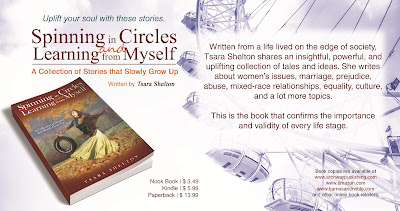 *If you're interested in learning more about my family, and their contributions to my journey of discovery and growing up, I invite you to get a copy of my book Spinning in Circles and Learning from Myself: A Collection of Stories that Slowly Grow Up (Available at Amazon, Archway Publishing, Barnes & Noble, BAM, Powell's, and more. Or check your local library! Request it, even!)
Posted by Tsara Shelton at 9:33 AM

Autism Answer: Fix It In Five At My Friend's House

Pre-Show Discovery:
(Wednesday)
FIX IT IN FIVE with LYNETTE LOUISE aka THE BRAIN BROAD, Season Two, is FREE on The Autism Channel, available to anyone with a Roku box. Unfortunately, I don't have a Roku box. (Fortunately, I do own season one digitally so I still get to be a legit Fix it in Fiver!)

But guess what? I'm hanging out at my friend's house in Colorado for a week and she has a Roku box!!!

Not only am I going to watch season two (episodes one, two, and three), but I'm going to watch it with a friend!!! We're going to chat and consider and debate and take action and implement new techniques in our separate homes, together!

If you've been watching season two already, don't give me any spoilers! And if you haven't, maybe check if your friend has a Roku box! It's a must see series!

Immediately we saw my mom among the new and popular shows. One click, and we were watching Fix it in Five with Lynette Louise aka The Brain Broad. Her energy (and my brother's energy - he has a cameo!) filled the Colorado living room. It was fantastic!

Soon, through the magic of television, Roku boxes, and intimate direction/editing, we were transported to a living room in California, sipping coffee and learning behavior techniques with a family who was struggling with disappointment because dad had made an excuse not to show up.

Bam, we were feeling and thinking and understanding and caring.

We watched the rest of the episode in fits and starts; pausing to discuss thoughts and ideas and aha moments. We felt ourselves fall easily in love with the family on the screen and comfortably trust my mom (aka The Brain Broad) to guide us in our discoveries.

As soon as we finished watching the show, my friend's family showed up. Her mom, sisters, nieces and nephew. We played and laughed in a new way; the visit had been tinted with a fresh energy and desire to connect deeply through play and openness. It was thrilling! The adults sang songs together, we got down on the floor with the kids and explored our authentic interest in them, and we watched some funny videos on YouTube. It was almost the same as every other time I've hung out with my friend's family, but the new ideas presented in FIX IT IN FIVE were showing themselves in the ways me, my friend, and her husband played. Soon they showed themselves in the entire family with the way they responded to our playfulness.

That night my friend and I sat up chatting until 4AM. We agreed, explored, disagreed, debated, and supported each other. We didn't talk about my mom's show, but the show was there; part of us.

One concept - the one about how we often instigate violence - was important for us that night. We shifted it and renovated it for our purposes, and we felt on the precipice of a necessary understanding. My friend's oldest son is going through something right now and we knew the answer to how she could help him lay in there somewhere. However, in our fatigue we merely tap danced around it, creating a momentum with our movements that tickled and fluttered the answer we were looking for, never quite giving it the gust of wind it needed to fly straight into our line of understanding. And we were deliriously and deliciously tired, so we did need it to announce itself on a gust of wind! Seeing it from our sleepy peripheries was not an option.

But the next morning my friend spent a little more time than usual in her bedroom. When she finally joined me on her couch (where I was sleeping for the week) it was with an energy of forward motion and happiness. After our evening of tap dancing (go ahead and imagine a couple of middle aged ladies with zero tap dancing experience tap dance. Funny, right? We totally should have done that! Alas, we were merely tap dancing around a learning. But that's fun, too!) some sleep and dreams had given her the gust of understanding she needed. After spending time texting with her son, forward motion (for her and him) and goals and self-confidence and appreciation came flooding to the surface. They had figured stuff out!

We watched one episode of FIX IT IN FIVE with LYNETTE LOUISE aka THE BRAIN BROAD on The Autism Channel together. One. And it did so much for us! Because the show is what it is and because we are who we are.


It's A Wrap:
(Thursday)
Obviously I want to sing it out to the whole world: Watch FIX IT IN FIVE! It's the answer to everything for everyone, plus it's fun! But I know better. I know that the true lesson has to do with choosing what we watch with purpose, being willing to shift and learn with an open mind, and sitting up all night with a good friend sipping coffee. (That last one might be for me. tee hee!)

But it's also true that some shows, some books, some places, some individuals, have a way with sharing important information and ideas that resonates and helps a majority of people. And that, my friends, is what I promise FIX IT IN FIVE with LYNETTE LOUISE aka THE BRAIN BROAD, is. That's what it can and does do.

I encourage you to watch it; alone, with friends, with family, and at school!

Maybe even sit up all night sipping coffee and tap dancing with friends to solidify your learnings! Giggle!


Enjoy this short trailer for season two of FIX IT IN FIVE with THE BRAIN BROAD!
Posted by Tsara Shelton at 9:06 AM