I wasn't a little girl who thought about marriage. My Barbie doll was a writer and nature lover who lived alone in the trees; miraculously free of mosquito bites. My Donny Osmond doll spied, took pictures, and wrote articles about how beautiful it was to see my Barbie (read: me) live naked and free and filled with love for all living creatures. A little creepy? Sure, but I liked having an audience without having to figure out how, exactly, to fit him into the picture.

As I grew older I still imagined myself living in the trees, but I included always a log style cabin and a typewriter. Dirty, happy children replaced the wildlife. Completely absent (with no backstory even invented) was a husband or father for those barefooted children.

But then one day I was a grown-up with three sons who found herself pregnant again and unable to stay in the USA; unless I married my then boyfriend. A man who was much older than me and had been married himself once before. A man who had never intended to marry again. And me, never having wanted to be married in the first place.

Let me tell you right away, when I met my now husband I was a single twenty-three year old mom with three happy, dirty sons living in a small house in the woods. However, the house was my mother’s and I also lived with my four brothers and their cognitive challenges (autism, learning disabilities, even Fetal Alcohol Syndrome – my brothers are adopted – were words I had seen stamped on papers around the house while I was growing up). Also, the fathers of my sons were absent from the picture but not from our story. Though it’s true I had always wanted to be a single mother, I never told the men that they could not be part of their children’s lives. Instead, I believe, I chose well based on my deep wishes. I chose men who were not likely to step up and do the work. But when living out my imagined picture I learned that there was so much more to it. Nagging doubts and important worries. How much work should I do to make it easy for the dads to see the boys? Never would I badmouth biological fathers to my sons, but how best to tell the truth? Tiny bites of big issues were buzzing consistently; some more hungry than others.

When I met my now husband I was open to a relationship but not anywhere near considering a possible husband or father. I loved being a mom to the point of not wanting to share. I had strong parenting opinions and no interest in explaining or defending them. I was selfish and comfortable with that. My boys first belonged to themselves, and then to me. The end.

So I wasn’t surprised when the sexy black man who fixed my mom’s car became my boyfriend. Well, I was a little surprised but only because there was no way we made sense together. I’m a white travel loving hippie chick from Canada and he’s a soda drinking black mechanic who had never been outside of Texas. He watches TV while I hike in the woods, singing to myself and imagining things. He’s twenty-three years older than me. I embrace a world filled with beauty and possibilities while he watches it warily for danger and crooks.

But we are similar down, down, down deep. We love the children. He had four children from previous relationships and I had three. And he loved my children as though they were our own. I was amazed by that! I focused on that. He would show up at my mom’s house with a box of donuts and cans of pop for the kids. I would cringe and remind everyone that the snacks were unhealthy, but I would see and feel the thoughtfulness. I’d cancel a date because one of the boys was sick and my boyfriend would immediately show up, regardless of the hour, with Dollar Store drugs for children to find me diligently nursing a sick boy using organic foods. He would invite us to his trailer house where the boys could watch cartoons, and I would struggle with my distaste for television while I adored his desire to have us around, even while my “freedom” style of parenting was wreaking havoc on his wildly messy piles of car parts and tools that looked to me and my boys like fun junk.

I grew to see how being with someone who cared about us but who was also very different would expand my edges, give me and my sons more to understand and think about while making me practice focusing on the intentions. It turns out, also, that explaining my parenting choices was a wonderful way to understand them better myself and to grow more confident as a mom.

When I became pregnant again I had a habit to break. And, indeed, I wanted to break it. This time I didn’t step away from the father and chose instead to see how we could be mom and dad together. Yet marriage still never occurred to me.

Until I got stuck in Canada on a visit to family and wasn’t allowed back in the USA. Suddenly the thought of marriage made tangible (if unromantic) sense.

The romantic part, I think, is how easily we understood that we wanted to be together, so 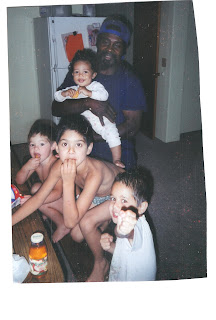 marriage was a no-brainer. We didn’t have a big wedding or ceremony; in fact, we met at the courthouse between separate appointments. He was fixing a car, I had an ultrasound scheduled.

We have spent the past sixteen years designing our marriage our way. I lived for a long time in my mom’s house in the woods, long after my mom and brothers had moved away. My husband, however, stayed in his trailer house in town. Our son was born at a cabin in Missouri while my husband was still in Texas. I lived with all four of our boys in California for a couple of years, helping my mom and my autistic brother when mom first started Brain & Body (my mom is international mental health expert Lynette Louise, aka The Brain Broad). Eventually, my mom sold her little house in the woods and the boys and I moved in with my husband in his trailer house in town. It was perfectly timed, two of our sons had already moved away to California and our youngest son spends huge amounts of time at the school in marching band, theater and leadership; so it’s convenient to be in town. My hubby watches TV while I sing to myself in the tiny patch of wooded area behind our house. Well, sometimes it’s too hot outside – okay, a lot of the time! --in which case I read and read and read in a room away from the television. Sometimes we snuggle together and watch a movie.

The diversity and uniqueness of my family couldn’t possibly be more impressive if written as propaganda advocating diversity. We are an almost ridiculous mix of colors, sexual identities, shapes and sizes, cognitive abilities, political opinions, and financial stabilities. I’ve grown accustomed to the confused stares of strangers when my older than me black step-daughter calls me “mom” at the grocery store. My oldest sons have tricks in their back pockets for looking less Middle Eastern in times of intense tension, and my gay son and gay step-daughter have revealed for me LGBT issues I had otherwise been unaware of. When my autistic brother screams with joy while jumping on the trampoline and the air smells deliciously of my best friend’s authentic Mexican cuisine and my youngest bi-racial son is dancing down the driveway, I know my family couldn’t have existed as it does once-upon-a- time in frighteningly recent history.

I’m lucky and I love this life. Yet there are certainly challenges I hadn’t imagined or anticipated in any of my fantasies of adulthood. My husband and I get equal parts disapproving glares and condescending “good for you” pats on the back. I am forced to see that our culture is prejudice in ways that seem almost never-ending; nearly invisible and easily ignored for those who choose not to see, but never ever not affecting us.

When I remember the Barbie life I imagined for myself it’s surprising just how well I knew (or created) my future life. I lived in the woods, my children were certainly dirty and happy, the diversity and value of wildlife is a gorgeous way to represent my unique family, and the husband I never imagined made it all possible.

He watches us. He gives to us. He loves us. He is one of the biggest parts of our stories although you’ll rarely see him in the picture. He’s a private person, but that’s only part of the reason. Largely it’s because when he was a little boy imagining his future, he imagined giving to a wife and children. He imagined giving them a home and love. They were a picture he painted but wasn’t in. And though his imaginary family didn’t look like us; they were us.

That’s the thing, though. When I imagined my life in the trees surrounded by wild cats, I never included the mosquitoes. The things that bite and make you move. Naked beauty comes with itchy bumps. The bits and pieces of a real life that can be dangerous but are mostly just annoyances. The mosquito bites are real. They are many, and they are real.

My marriage and my life are beautiful and real.

It’s a marriage with mosquito bites.
_________________________
Author's note: I submitted this piece to Hitched Magazine the other day, in honor of my husband and I and our wedding anniversary this month. I wanted to celebrate seventeen years of marriage with volume! I'm honored that they accepted and published it. Now, I just have to find a way to tell my private husband that thousands of strangers are celebrating our marriage with us. tee hee! Thank you for being here, friends!!

Happy anniversary to my magnificent husband and our lovely family!!
Autism Answers with Tsara Shelton (Facebook)