This book, written by my mom in the form of a letter to an ex-lover, is the story of a woman who discovers and heals herself while gathering and guiding others. In this poetic pursuing of truth, of self-discovery, of creating an environment her eight challenged children can thrive in, my mom does not shy away from raw emotion, naked passion, or vulnerable positions. Indeed, she steps into them with love.

April is Sexual Assault Awareness and Prevention Month, it is also Autism Awareness and Acceptance Month. It is also my mom's birthday month. Of all my mom's books this one, Jeff: A Sexually Realized Spiritual Odyssey of Stepping Into Love, is the most timely. Though all her books teach and tell about abuse prevention and autism acceptance, this one holds the audience’s hand and brings us intimately into the journey itself. This is the book mom wrote that took her to the places where she was able to write the other books.

Mom met Jeff a few years after leaving an abusive husband (my step-dad), moving into and then graduating out of a home for battered women, while raising six, then seven, then eight children. Mom had given birth to my sister and me before meeting my step-dad, then adopted my brothers (four boys, all with a variety of disorders and dysfunctions, including autism and fetal alcohol syndrome) just before leaving him, and then got custody of two more girls a few years later, since they had nowhere else to go that was safe.

Mom, who had a history of being abused, including sexually so, had gathered so many children to love and save. But she herself had not yet felt loved or saved. Enter Jeff. (Pun intended.)

Jeff gave my mom love. He accepted all her strangenesses in stride. (In my memory, Jeff had rather long legs which must have helped fit all that strangeness into his naturally long stride. Giggle!) And he found ways to take care of her, to pamper her, without ever giving her the feeling of being needy, of not being strong.

In this letter mom reminisces with Jeff and catches him up on her life, particularly filling him in on the relationship she’s in at the time of the writing, and on relationships along the way.

Throughout the letter that is this book mom is not shy. She does not cover up her nudity but, instead, encourages us to explore it. To recognize ourselves, our world, our own truths, fears, judgements, kindnesses and cruelties, while traveling not only her gentle curves but also the dark spaces. To bring with us an open mind and soft lights.

She exposes the burden of her own bi-sexuality, a secret sin she felt was sinful due in part to a homophobic ex-husband, and invites us to discover with her the beauty that is not a sin.

And though I have intensely sexy memories of her feathery soft hair whispering on my thighs, what truly made the experience so heady, so overwhelmingly amazing, was the discovery of the me… in her.

Up until that moment I had felt that men were only pretending to like to look at my slimy, ugly genitals. That they were only putting up with touching me, in order to get the part they wanted, the part where I touched them back.

And I felt,
As I felt,
That I was feeling me,
And finding me sexy.

The discovery of herself, while discovering others, while giving and receiving love, is such a consistent theme in mom’s life. And in this book she brings us along.

It is almost as if we, as an audience, leave the controlling name calling clutches of my step-dad and fall into the work of breaking patterns as well.

I counted on my husband to control me into respectability and teach me how to behave so that I could like myself and my family could be proud of me for finding someone who agreed with them. Called me a slut. I hoped to change myself into their version of good.

I guess that’s why, when my husband molested my daughter which reminded me that my father had molested me, I felt my complicity in the fact that I had followed the family pattern for success.
And so finally I stopped listening to what others told me and began searching for my own truth,
And discovered that all the work is done in the mind.

Ah, yes. It is. Knowing that to be true, that all the work is done in the mind, is liberating but doesn’t solve it. We still must do the work. And our minds are not so easily understood. Though embarking on this odyssey with mom does help, and we begin to see how she went on to become the world-renowned brain change and behavior expert she is today.

But before mom was helping families around the globe (autism is her specialty but the families she works with always also have other disfunctions, disabilities, and disorders) she was homeschooling her sons and putting food on the table, keeping a roof over our heads (me and my sons were living with her at the time), by helping men in the Houston area.

I called it “Romance Therapy” charged by the hour and actually helped people with sexual self-acceptance issues. Which is interesting since they say you teach what you need most to learn. I re-packaged the oldest profession in a way that would make it legal and allow me to claim it on my income tax. I had found my niche, my solution, my way to still teach, everyone.

A little later in the book:

Dark and handsome Edward who cared more about talking, seeking acceptance for the lack of lust towards his wife, getting solace from suffering for days before and after each visit, flogging himself with guilt.

Tall and gorgeous Steve who needed to idolize and adore for an hour every two week. So that when he ordered and bossed and controlled the staff beneath him, he could remember he was kind.

Tom who looked for forgiveness ever since Vietnam and John who was every woman’s dream date but didn’t stay in one town long enough to build towards intimacy, with no strings attached.

And sweet precious Jerry who turned out the lights and pretended I was his “ill-with-lupus wife.” He couldn’t make love to her as she would bruise from the slightest touch. So he caressed her sick body through my healthy one, whispering in the darkness, silently, her name.

Curtis, Mario, and Brian who were physically disabled and required a great deal of care, from catheters to carrying while radiantly gifting me with their smiles of divine physical beauty. If fact most of my clients were beautiful.
Inside,
And out.

This sexually realized odyssey is not a book about sex, but it is a book that brings us into the vulnerabilities and intimate realizations we can have while being sexual.

Ted [a man she is seeing] began to apologize and explain that he hadn’t understood.

I cut him off gently.

“I never expected you would, that’s why I’m explaining now. But I need you to know me. To know I can be trusted to be kind. That there is never a moment when I’m not doing the best I can for my kids. So next time if you’re not sure, don’t tell me what I am doing. Ask me.”

It is the love letter that helped my mom step out of abuse, into a world of teaching acceptance, and 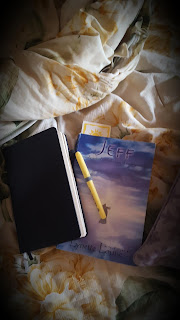 It is a love letter for Jeff. For my mom. For us kids. And for you.

Posted by Tsara Shelton at 1:19 PM