Autism Answer: No Means No - And Even More, You Need Permission


"What did I do? How did I screw up again? What is it about me? Why am I so weak and pathetic?"

Those are the things I wondered every time I was sexually harassed, molested, or raped.
"Well, it was only boob touching, it was only rubbing my bum, it was only uncomfortable sex, it wasn't me screaming and fighting and getting punched and stuff."
Those are the things I said when loved ones encouraged me to tell, to bring the incidents to the attention of authorities.
"No means no. Even if you think it's a game, even if nobody is screaming, no means no. Every time. Not only that, you need to get permission. You need to be told yes. Every time."
That was the thing a judge said when I did go to court, when I did listen to my sister and my mom and go to authorities.
It was a huge, huge, huge important thing. Because, you see, I hadn't known. My rapist hadn't known. We were equally surprised to learn it. I had felt certain that my promises of sexual interest the weeks before gave me next to no rights that day he showed up with a friend. I believed my tears and quiet pleas of, "no, I changed my mind," were, as my rapist said, unfair and invalid.
I had heard, of course, that no means no. I had heard it before that day. But I hadn't believed it. I hadn't seen it proved true in the the world. So, I hadn't really believed it. Not until that judge said it with such clarity from his important place in that room.

By that same token, though, when authority and power chooses to teach, example, and insist on equality, on kindness, on speaking up, we hear it different. We believe it different. We expect different things from ourselves and the people around us.

I would like to say that when I left that court room I never blamed myself again. I'd like even more to say that I never had reason to wonder who's fault harassment and sexual abuse were. I can't say that.

It still happened. In this world, where the culture is one that breeds a belief in "boys will be boys" and "what a cock tease" and "way to go man, high five" and "well, you shouldn't have been alone with him" it's more likely to happen than not, I fear.

I can tell you, however, that I knew now that no means no. I knew that people had no right to touch my boobs or my bum without me telling them yes. And I knew I had no right to do such things to others without their permission.

I can tell you that I started expecting different things from the world, and I started walking away and telling authorities when things were inappropriate. I had learned that sometimes people just don't know that what they are doing is wrong, and when they do know I have a right and responsibility to speak up so it might not happen to others.


"What did I do? How did I screw up again? What is it about me? Why am I so weak and pathetic?" This is one reason people don't tell when they are abused or harassed.But there are many others. Losing our jobs, thinking it's normal, knowing that other stronger women have been through more and handled it, these are a few other reasons. And there are more.

Some people don't tell because they don't have the ability to. In the world of disability sexual abuse and harassment is a big problem. Also, pedophilia is a big problem. Disabled people and children are already too often taught by society that they ought to shut up and do what they are told. Often they are treated as less than or as lucky to be taken care of in the first place. Often, they just don't have the ability to speak at all because of their disability or young, young, young age.

I wish I could gather everyone into that courtroom with me, everyone in the world, and we could listen together in the same way I listened that day. I wish everyone could hear, the way I heard - with conviction and belief and life changing tectonic plate shifting clarity - what I heard that judge say.

If you ever catch yourself, as the done-to or the doer, justifying by thinking these sorts of things:

And there was not permission given, no clear "yes" offered, then something went wrong. (And where disabled people are concerned "yes" can be not enough, depending on the disability, and where children are concerned, just NO.)

Don't hate yourself. But take steps to change it. Reach out and apologize or admit your cruelty if you were the doer, talk to the safest person for you, in your situation, if you are the done-to.

Sex and sexuality are interesting and exciting and filled with valuable fun, love, learning, and exploration. I encourage you to do the work of making sure it is done carefully and mindfully.

We have to change the culture around this issue. We have to be not afraid to ask for sex while we aren't afraid to say no. We have to teach each other that it is never ever okay to push or force or sneak in unwelcome touches.

No means no. And even more, you need permission.

It's simple, really.
Let's make sure everyone gets the memo.
Let's change the culture. 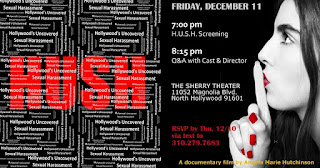 Also consider checking out this documentary that my mom was a part of: HUSH: Hollywood's Uncovered Sexual Harassment

Or even purchase a copy of my book, Spinning in Circles and Learning from Myself: A Collection of Stories that Slowly Grow Up where I talk candidly about being molested by my step-father and mention being groped by a fellow co-worker as well as threatened by a creepy phone repair man. I also tell the story of me raping a boyfriend. As is my habit I tell these stories with an eye on answers and hope. It is my intention to always tell the difficult stories, to not hide from them, while seeking helpful nuggets of wisdom and suggestions for change. My success rate is yet to be determined. Actually, scratch that. I am successful because my home and my life and my mind are healthy, happy, and safe. :D
Posted by Tsara Shelton at 2:38 PM