* I stumbled across this old article of mine that appeared in OpEdNews at the end of 2014. I don't remember if I've shared these thoughts here with you so I felt invited to do so. Hugs and happy reading!! ~Tsara
My softhearted naivete has been a challenging gift.
In the presence of love and acceptance, I've always believed , prejudice will easily be lost.
But then things happened.


I was a teenage single mom, a mom with bare-feet allowing freedom for her noisy sons in grocery stores and quiet waiting rooms, a mom whose children were all different colors and who didn't go to church, a woman who finally loved and married a man with skin colored differently and the age difference of a generation.
While living life as myself, my softhearted naivete has been scoffed at and challenged. Even by my own husband who truly does love me. Even, in the more intense moments of self-reflection, by me.
But mostly by a world which can be prejudiced, cruel, and afraid.

When I moved with my sons to California, hoping to temporarily leave behind some of the more obnoxious prejudice of our small Texas town, my oldest boy came home after his first day at the new school proclaiming that he'd been abused and called a "terrorist" by his peers, and the bus driver had encouraged the behavior with shrugs and a tangible silence on the issue, that day my beliefs were challenged.
When I was told by officials in our small town that part of the reason they were threatening to take my kids away was simply that "They didn't like my kind around here" well, my softhearted beliefs were also threatened.
When Trayvon Martin was killed by George Zimmerman in 2012, and my husband and I continually asked our youngest son to take off his hood before going out with friends, and then wondered if he should even go out with friends, I'll admit my goodness and love beliefs were shaken.
When another of my sons was consistently on edge and playing defense anytime he visited with his girlfriend's family who would throw around horrible and offensive terms--f*ggots, n**ger, sand n**ger, ret*rd,--knowing well who his family was and who he loved, my love and acceptance beliefs were trampled on.

When my autistic brother would surprise a stranger by picking the lint off of their sweater or delightfully flicking their ponytail, and be responded to with anger or pathetic pity, my belief in a world that wanted to choose kindness was challenged, which too often challenged me so much that I was momentarily unkind.
When Barack Obama was elected president an my husband and I braced for the inevitable storm of hatred we correctly felt coming in our bones, my softheart trembled under the weight of hate.

When another one of my sons, who is large, gay, funny, and strange, was battling depression and a hate for the people who use religion to be vocal and angry about men who love men, my belief in simply love was belittled.
And yet, despite these and so many other instances, huge and minuscule, that threatened to harden my heart and encourage me to take up arms to fight fire with fire, my beliefs remain.
Though, I am no longer naive.
I no longer think I can parade my family around with the expectation that we will always be quickly accepted, or that just by our loving nature we'll open eyes and encourage folks to rethink prejudice or assumptions.
I no longer think it's as simple as seeing our love. For folks who would otherwise choose to believe some people are better than or more important than others, observing my loving and diverse family (and the many other families like ours) at the airport or bus stop is not going to be that epiphany or catalyst for change. Not likely.
I no longer believe all people will willingly feel our love. Regardless of my comfort with (almost) always loving and having honest interest in all people, I've learned that my love isn't always appreciated or, and this is true, pure.
I no longer expect all people to accept us just because we are nice, or fun, or hard working. Now I know that we aren't actually these things in everyone's opinion.
I now know that it has taken work to get the half-assed acceptance and almost equality we have today. And that it will continue to take work and persistence and reflection and evolution to one day watch my sons walk off with their friends into a world that will accept them all as equally valuable.
But the reason I know these things is not because I'm smart or worldly. Instead it is my softhearted naivete, the willy-nillyness with which I had colorful babies at a young age, before marrying an older and different than me man, that insisted I learn these important truths.
I am a child of society, just like you. Yet, I am also a child of diversity, with a mom who perseverated on fairness and equality, so I've had that going for me.
But my own very real prejudices also became apparent as time grew with me, and my intense desire to be a good mom--indeed, I've always dreamed of becoming a great mom!--meant opening my eyes and doing the work. The work within me first, and continually, as I step out into the world.
But, as luck would have it, the work is love! Challenge, shake, trample, or belittle my beliefs all you want, they remain strong.
Stronger, because they have faced and grown to better understand their would-be enemies.
Yet today my soft heart and baskets of love in the face of hate are no longer naive.
And they work better and more efficiently than they used to because of it!
Most notably though, they still work.
They work hard, passionately, and almost desperately in the face of cultural realities, systemic and deep seeded as they are.
But always, eventually, love works.
And though it works best when it's not naive, I find that a little naivete can gift us with challenges we may have otherwise stepped away from.

My softhearted naivete has been a challenging gift.

And I am dedicated to sharing it with a world that it helped me believe in and forever love!
Hugs, smiles, and love!!
Autism Answers with Tsara Shelton (Facebook) 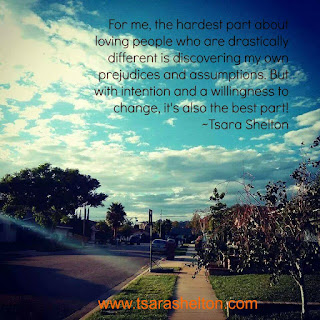 For more stories and thoughts that grew up with me over the years I invite you to read my book, Spinning in Circles and Learning from Myself: A Collection of Stories that Slowly Grow Up.
Posted by Tsara Shelton at 7:05 AM