Author’s note: For the past two days I’ve been reading Go Set a Watchman by Harper Lee. I am an addict of novel reading and dive in always for the pleasure of living lives different (often drastically) from mine, and for the joy that comes with recognizing our sameness. It was no different with this book; my agenda and intention was clear: to have fun. Despite what I may reveal in the following review please know that I really, truly, and deeply did have fun.

Go Set a Watchman by Harper Lee
I wonder if this book was manifested by our need for it. 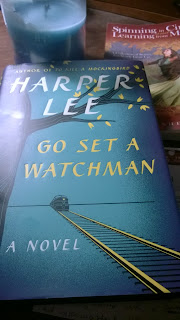 The story of its discovery and publication is fraught with controversy and distrust, bringing both fear and hope to fans of Harper Lee and her, until now, one published novel To Kill a Mockingbird. Making a mess of the neat and tidy cozy perfection Harper Lee had introduced to the world with the pairing of curious, indelicate, barefoot Scout and her quiet, strong, kind, brave gentleman father, Atticus.

In Go Set a Watchman we are introduced to Jean Louise Finch, the once upon a time six year old Scout, on her fifth annual visit from her adult life in New York to fictional Maycomb, Alabama, her childhood home.

The visit finds Jean Louise, and me as a reader, on the edge of a new kind of independence; visions of the playful past, the painful past, and the presumed past grab hold and mess with our ideas of where we come from and who made us. Visions of potential futures fail to excite or fit us. Jean Louise is courted by a lifetime love, surrounded by family who “gets” and celebrates her, yet she’s at a loss to know herself independent of who they are. Especially her father, Atticus.
The country, too, is in the midst of fighting for a new kind of independence, a new kind of knowing itself. And for the first part of the book I found nothing but nostalgic joy and empathy for the woman who is trying to discover herself as a woman, amidst change and political turmoil.

But as I came to the part of the book I had been excitedly anticipating, having read warnings and mixed feelings on this supposedly new Atticus, this racist not-the-hero we fell in love with from To Kill a Mockingbird Atticus, I was sent reeling into a similar past of my own. I had been confidently prepared to go along for the ride of the disappointing discovery and empowering understanding that comes with shedding childish notions of right and wrong, good people and bad people. But I hadn’t been prepared to feel and remember it.

Jean Louise secretly observes Atticus--the man who raised her and gave her every reason to know herself as right and good-- at a meeting surrounded by men advocating for the opposite of everything she believed he believed, and therefore she believed. The Citizens' Council is made up of almost all of Maycomb's prominent men speaking about the need for segregation, the dangers of the NAACP (National Association for the Advancement of Colored People), the inability of the Negro to vote in the best interest of the country, all things she was convinced he was morally opposed to. The group of men include not only Atticus but also her lifelong beau.

As Jean Louise felt herself die, I was transported back to my own past where I, too, was left lost and broken and completely alone. When my step-dad, the man who loved my mother and gave me every reason to know I was safe, molested me I was tossed into turmoil and cut off from everyone I loved and everything my experiences had told me to believe.

I had to put the book down, I had to breathe slowly and remember the chaotic beauty and messy important lessons we had been nearly forced to learn. There are those who choose not to learn, but we did, and I chose to put my faith in Jean Louise to find similar answers.

Picking up the novel again I was thrown into her world, one of the privilege that comes with being the white daughter of a lawyer, especially of Atticus Finch, but of disability too. Being color blind her whole life had always made Scout different from her peers, but like with most invisible disabilities the difference was small at first. Quirky and strange, but acceptable. As Scout grew the differences amounted to misunderstandings and made up morals. Jean Louise had grown into a young woman who had learned it all wrong and now had to make sense of everyone in her life being a lie. Including herself.

I held on tight while she bounced from family member to family member searching for what she was missing, seeking an explanation for her difference. I thought of so many people I love who, via their differences and disabilities, have been able to teach me truths I may have not otherwise known, and I applauded her and begged her to see her value. To see herself.

I felt angry, uncertain, thoughtful, and angry again. My dear readers, there is no way to read this book without feeling angry. With so many clashing ideologies and strong morals, there is no one who will be left out!

It would have been easier to put the book down.

It would have been easier for Jean Louise to give herself over to the prejudice-pretending-to-be-polite interests of Maycomb.

No, it wouldn’t have. Not in the long run.

So we ventured on, Jean Louise and I.

With the support and push of her loved ones, Scout let go. With uncertainty and a naked new freedom Jean Louise forced herself into her own form of individuality.

This is, I believe, what we must do as a society.

We must grow up a notch.

Scout was right to put her faith in Atticus. He was consistent and kind and offered his children freedom. He always had time for them and he was a strong, honest, anchor.

Like Scout, I was right to put my faith in my step-father. It gave me years of comfort and the joy of watching my mom be loved. My sister and I felt confident and safe.

Like Scout, as fans of To Kill a Mockingbird we were right to put the hero, Atticus, on a pedestal. It grew us comfortably in the right direction.

But we must be Jean Louise now. We must open our eyes and see how we’ve been fooling ourselves while we’ve been fooled. We must see that our painful past is playing with us, teasing us into thinking things like: “We” gave “them” what “they” said “they” wanted and look what “they” do.
Like Jean Louise we must hurt and fear and let go of the beliefs we thought were our own and with uncertainty stand naked inventing a new freedom to think differently and form our own inclusive individuality.

This is the messy part.

But it’s already messy, isn’t it?

So, like Go Set a Watchman, let’s do it now. Let’s not wait until we’re perfectly edited and let's not pay too much attention to our controversial and unknowable backstory.

I recommend reading both Go Set a Watchman and To Kill a Mockingbird, in any order.

The author, Harper Lee, is a woman both before and completely of her time.

Posted by Tsara Shelton at 5:49 PM