Autism Answer: A Boy And His Prom 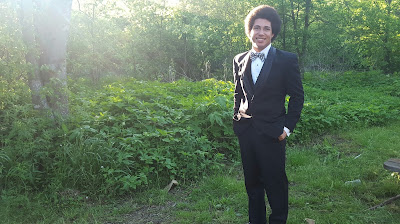 As promised in my last post, I'm playing my role this Autism Awareness Month as the introducer of people I know and love that are actively making a difference.

I also promised to spam update you with pictures of my son on prom night.

I love making promises that allow me to show off my family with legitimate reason!

So, here's an introduction to my youngest son:

When he was little we would go to playlands and parks, he would spend at least an hour holding me tight wanting to play but far too socially uncomfortable. If there was even one child other than his brothers, it would take at least an hour for him to play. I would sip 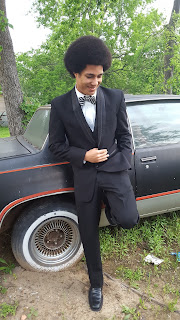 coffee, encourage him, and wait.

He would be invited to birthday parties, sometimes we would even drive to the address on the invitation and start to walk in, but as a child he never quite found himself able to attend. He'd cry and talk for hours at himself about why, how, maybe next time.

Now, he loves working in marching band, theater, leadership. He has found a social way for himself: knowing his role and having a job to do. Also, he enjoys playing video games with one-friend-at-a-time. Another way to be social without feeling overwhelmed and uncomfortable.

However, he still wants to be able to play at the park, hang out with friends, go to prom. So - though he never seeks it - he puts himself in that uncomfortable place when an opportunity presents itself. He shows up at the party or buys a ticket to the prom. He makes sure I'm available to pick him up. He talks to himself for days leading up to an event about why he can change his mind, why he shouldn't, what he might talk about if he goes.

I'm so impressed by him. He expands his own edges and asks me only to understand, to drop him off, to pick him up, to let him transition. He's amazing, handsome, and brave.

I adore this boy.
I hope he has fun at the prom! 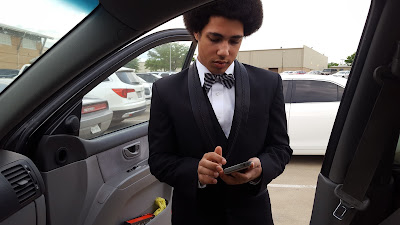 BEFORE: He's sitting silently on his couch, head down and tux on. "I'm trying to think about what to say to people. I'm starting to feel that feeling that I don't want to go. Can you drop me off and not walk to the door with me? I don't want to hurt your feelings I just need that time to get in the right mood."

MOMENTS AFTER I DROP HIM OFF: My phone rings and he says, "There's so many people here. I'm just sitting outside waiting for the crowd at the door to thin out. Want me to send you a picture of me sitting here?"

HOURS LATER: I pull into the parking lot and text him so he knows I'm there. "I won best dancer, do you see all this sweat? I did a back flip. Don't look at me like that, I was careful. Man, the sweat is soaking through my shirt! That was fun!"

CONCLUSION: He had a great time!

Posted by Tsara Shelton at 7:09 AM